If Kathmandu is the cultural hub of Nepal, Pokhara is its center of adventure. An enchanting city nestled in a tranquil valley, it is the starting point for many of Nepal’s most popular trekking and rafting destinations. The atmosphere on the shore of Phewa Lake is one of excited vitality as hipster backpackers crowd the many bars and restaurants exchanging recommendations on guest houses and viewpoints, both by the lake and above the clouds. 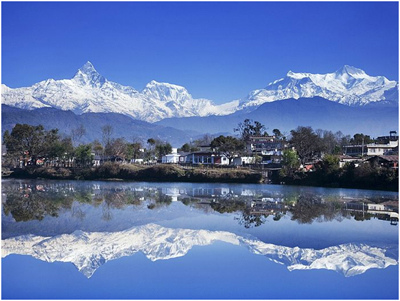 Pokhara is a place of remarkable natural beauty. The serenity of Phewa Lake and the magnificence of the fishtailed summit of Machhapuchhre (6,977 m) rising behind it create an ambience of peace and magic. At an elevation lower than Kathmandu, it has a much more tropical feel to it, a fact well appreciated by the beautiful diversity of flowers which prosper in its environs. Indeed, the valley surrounding Pokhara is home to thick forests, gushing rivers, emerald lakes, and of course, the world famous views of the Himalaya.

The powerful rule of the old kings of Kathmandu, the Lichhavis and the Mallas, held sway over this valley for some time. As these dynasties fell prey to their own troubles, Pokhara Valley and the surrounding hills disintegrated into small kingdoms, frequently at war with each other. These were called the ChaubiseRajya or the Twenty-four Kingdoms. It was among these that Kulmandan Shah established his kingdom. His descendant Drabya Shah was the first to establish Gorkha, home of the legendary Gurkha warriors.

Finally, Pokhara is part of a once vibrant trade route extending between India and Tibet. To this day, mule trains can be seen camped on the outskirts of the town, bringing goods to trade from remote regions of the Himalaya. This is the land of the Magars and Gurungs, hardworking farmers and valorous warriors who have earned world-wide fame as Gurkha soldiers. The Thakalis, another important ethnic group here, are known for their entrepreneurship.

Clearly the most stunning of Pokhara’s sights is the spectacular panorama of the Annapurna range which forms its backdrop. Stretching from east to west, the Annapurna massif includes Annapurna 1 to IV and Annapurna South. Although the highest among them is Annapurna 1 (8,091 m), it is Machhapuchhre which dominates all others in this neighbourhood. Boastfully levitating in the skyline, the fish-tailed pinnacle is the archetypal snow-capped, needle-pointed mountain. If you want to see the mountains from close up, Everest Air offers a mountain flight from Pokhara that takes you on an aerial sightseeing tour of the western Himalaya. 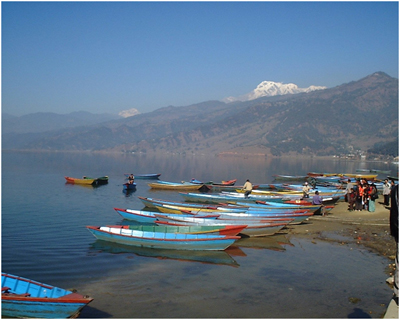 Phewa Lake, the second largest lake in the Kingdom, is the center of all attraction in Pokhara. It is the largest and most enchanting of the three lakes that add to the resplendence of Pokhara. Here, one can sail or row a hired boat across to the water or visit the island temple in its middle. The eastern shore, popularly known as lakeside or Baidam, is the favorite home base for travellers and is where most of the hotels, restaurants and handicraft shops are located. 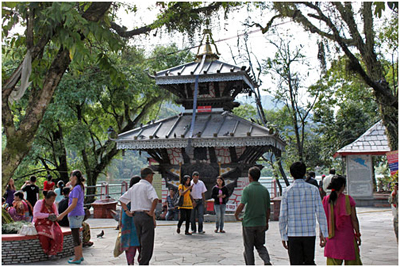 TheBarahi temple is the most important monument in Pokhara. Built almost in the center of Phewa Lake, this two-storyed pagoda is dedicated to the boar manifestation of’ Ajima, the protesters deity representing- the female force Shakti. Devotees can be seen, especially on Saturdays, carrying male animals and fowl across the lake to be sacrificed to the deity. 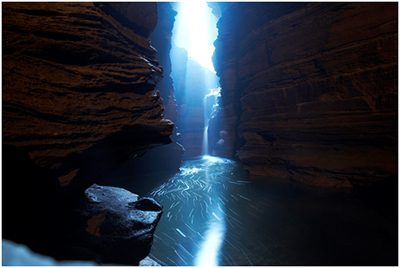 Another of Pokhara’s natural wonders that unfailingly interests visitors is the SetiGandaki river. Flowing right through the city, the boisterous river runs completely underground at places. Amazingly, at certain points the river appears hardly two meters wide. But its depth is quite beyond imagination over 20 meters! MahendraPul, a small bridge near the old Mission Hospital, provides a perfect view of the river’s dreadful rush and the deep gorge made by its powerful flow. 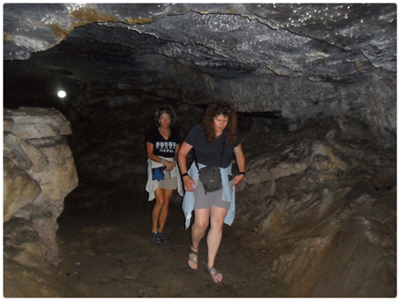 Another of nature’s wonders in Pokhara is the MahendraGupha. This large limestone cave is locally known as the House of Bats, an apt name for it. A two-hour walk to the north of Pokhara, it is best to bring your own torch to see the stalactites and stalagmites, as well as the local winged residents.

Pokhara’s traditional bazaar is colorful and so are its ethnically diverse traders. In its temples and monuments can be seen ties to the Newar architecture of the Kathmandu Valley. Located about four km from Lakeside, the market’s original charm is alive and well. This area strewn with shops selling commodities ranging from edibles and cloth to cosmetics and gold is a pleasant and shady spot to stroll around.
The old bazaar is also home to one of Pokhara’s most important shrines’. Locally called the BindhyabasiniMandir, this white dome-like structure dominates a spacious stone-paved courtyard built atop a shady hillock. It is dedicated to Goddess Bhagwati, yet another manifestation of Shakti. The park-like grounds offer a fine picnic area, and on Saturdays and Tuesdays when devotees flock there to offer sacrifices, it takes on a festive local flavour. 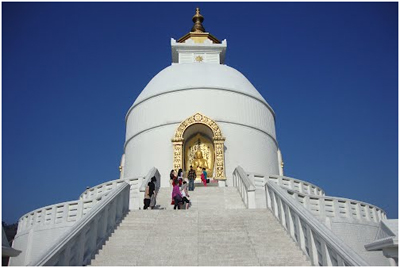 The Pokhara Museum, located between the bus stop and MahendraPul, reflects the ethnic mosaic of western Nepal. The lifestyles and history of ethnic groups such as Gurungs, Thakalis and Tharus are attractively displayed through models, photographs and artefacts. One major attraction is a display highlighting the newly-discovered remains of an 8000-year-old settlement in Mustang. Open daily, except Tuesdays and holidays, from 10 am to 5 pm. Entrance fee is Rs.10 (tel 20413).

The Annapurna Regional Museum, also known as the Natural History Museum, is another interesting visit in Pokhara. Run by the Annapurna Conservation Area Project (ACAP), the museum has an exceptional collection of butterflies, insects, birds and models of wildlife found in the area. Located at Prithvi Narayan Campus east of the old bazaar, it is open daily except Saturdays and holidays from 9 am to 5 pm. Entrance is free (tel 21102).

Pokhara is the starting and/or finishing point for some of the most popular treks including the Annapurna Circuit and the Jomsom Trek. It also offers a number of short treks for those who cannot opt for long, challenging ones. The most popular destination among them is Sarangkot (1592 m), a former Kaski fort lying atop a hill to the west of Pokhara. The panoramic view of the Himalaya seen from this point is superb. Kahundanda, Naudanda, Ghandrung, Ghorepani, and Ghalchok are other favorite destinations around Pokhara.

Pokhara is located roughly 200 km west of Kathmandu. The journey between these two famed cities is certainly part of the Pokhara experience. Flying over the snow-capped Himalaya to the north and the green Mahabharat range to the south is thrilling, while the overland journey past sparse rural settlements nestled along the Trisuliriver provides a view of life particular to Nepal’s middle hills. There are daily flights and bus services between Kathmandu and Pokhara.