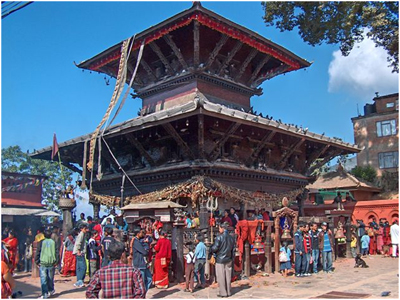 The Manakamana temple situated in the Gorkha district of Nepal is the sacred place of the Hindu Goddess Bhagwati, an incarnation of Parvati. The name Manakamana originates from two words, “mana” meaning heart and “kamana” meaning wish. Venerated since the 17th century, it is believed that Goddess Bhagwati grants the wishes of all those who make the pilgrimage to her shrine to worship her…

TIn earlier times the only way to reach the Manakamana temple was by walking uphill for about three hours. Now, there is a cable car that runs from the cable station of Cheres, just 5 kilometers east of Mugling to Manakamana. The cable car rides over the distance of 2.8 kilometers in 10 minutes more or less. The cable car usually operates during the daytime from 9am to 5pm stopping during lunch break from noon to half past one. His Royal Highness Crown Prince DipendraBirBikram Shah Dev inaugurated Manakamana cable car on November 24, 1998. The cable car system was imported from Austria and guarantees a hundred percent safety. It has features such as automatically operated generators in case of power failure and hydraulic emergency drive. The employees working at the cable car service are qualified and well trained for emergencies.

The bottom station of the cable car is placed at Kurintar (258 meters) and the top station is at Mankamana (1302 meters). With 31 passenger cars and 3 cargo cars, the cable car can handle up to 600 persons per hour. The number of passengers per carrier is 6. The cable car requires a starting power of about 523 Kilowatt and continues further at a power of 420 Kilowatt. All passengers are insured up to Rs. 1,00,000. The tickets for the cable car are valid for seven days from the date of issue.

The rates for the cable car ride inclusive of all taxes are as follows: