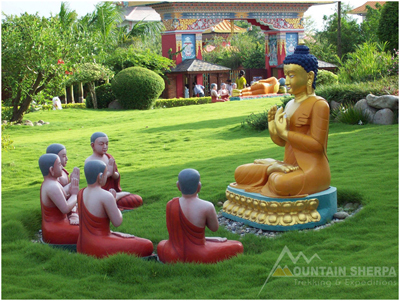 Lumbini has been a holy ground for Buddhists all over the world. The restored garden and surroundings of Lumbini have the remains of many of the ancient stupas and monasteries. A large stone pillar erected by the Indian Emperor Ashoka in 250 BC bears an inscription about the birth of the Buddha.
An important part of Lumbini is the temple of Maya Devi. It has a stone image of Maya Devi giving birth to Lord Buddha as she holds onto a branch. It has been well worn by the strokes of barren women hoping for fertility. To the south of the temple is a pool where Queen Maya Devi is said to have bathed and given her son his first purification bath.

A quiet garden, shaded by the leafy Bo tree (the type of tree under which Buddha received enlightenment), and a newly-planted forest nearby lend an air of tranquillity which bespeaks Buddha’s teachings. Lumbini is now being developed under the Master Plan of the Lumbini Development Trust, a non governmental organization dedicated to the restoration of Lumbini and its development as a pilgrimage site. The plan, completed in 1978 by the renowned Japanese architect KenzoTange, will transform three square miles of land into a sacred place of gardens, pools, buildings, and groves. The development will include a Monastic Zone, the circular sacred Garden surrounding the Ashoka pillar and Maya Devi temple, and Lumbini Village, where visitors will find lodges, restaurants, a cultural center and tourist facilities.

An important archeological site near Lumbini, Kapilvastu evokes the ancient palace where Lord Buddha spent his formative years. Scattered foundations of the palace are abundant, and archeologists have by now discovered 13 successive layers of human habitation dating back to the eighth century BC. A must for archeological and historical buffs!

Besides its religious and historical significance, Lumbini offers cultural insights into the village life of southern Nepal. If possible, try to coincide your visit with the weekly Monday bazaar when villagers come from miles around to buy grains, spices, pottery, jewellery, saris and various other items. It may appear as a scene out of the Arabian Nights, with colorful merchandise spread out under the mango trees and the air perfumed with incense. It’s a chance to bargain for souvenirs while witnessing local life in Lumbini. Wooden ox-carts loaded with hay trundle by. Villagers dry cow-dung for fuel, and tea stalls serve sweet milk tea.

Today, Lumbini is beginning to receive travellers’ and archaeologists’ attention after centuries of neglect. Serious preservation work has only just been started in the latter half of this century and Lumbini as a slice of history is worth seeing and worth preserving.

Royal Nepal Airlines and other airlines fly regularly to Bhairahawa, near Lumbini, and bus services are available from Pokhara and Kathmandu.

There are several good hotels and lodges in Lumbini.