Kathmandu is situated in a bowl shaped valley wwin central Nepal. The Kingdom extends about 885 km. east to west and 193 km. in width north to south. The entire terrain is like a steep incline, descending from the icy Himalayan heights to the hot Terai flatland within a short distance. 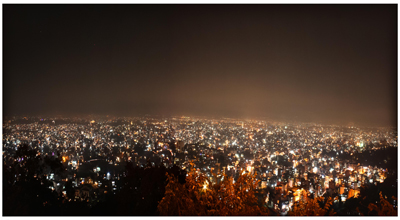 The city of Kathmandu was built by king Gun Kamdev in 723 A.D. It is said that Kathmandu was a lake in the past and was made habitable by Manjushree, who cut open the hill to south Chovar) as to allow the water of lake to flow out.
It is said that Kathmandu city was named after ” Kastha-Mandap” meaning the temple made of wood in Sanskrit , an imposing pagoda near Hanuman Dhoka Palace. It was built in 1596 out of a single tree by King LaxmiNarashinghaMalla.

Kathmandu is the capital of the kingdom, situated in a valley which is an open air museum of famous sites, ancient temples and shrines, golden pagodas and are inspiring deities, is a city of inexhaustible historic artistic and cultural interest. Several beautiful and interesting villages and towns surrounding the valley offer ideal destinations for mini treks. The dazzling Himalayan peaks are visible from several points on the mountains around the valley.
The capital is quite upto date in terms of comfort and convenience boasting luxury hotels, bars, restaurants, shops and casinos. Transportation is convenient and inexpensive. Medical service is quite good. Shoppers may purchase unusual gifts and souvenirs from an interesting assortment of items such as handicrafts, carpets, wooden art works, bronze casting and metal work, thankas, Nepali paper prints and readymade garments.

A very old Hindu text has described Kathmandu as the land of gods surrounded by beautiful mountains around. Some two hundred years ago a western Visitor wrote that there were as many temples as there were houses and many idols as there were people. In fact Kathmandu boasts one of the largest congregations of magnificent historical monuments and shrines ever built. Duly recognized as a world Heritage Site by UNESCO- this particular area best known as Kathmandu Durbar Square lies in the heart of this city. Locally also called as Hanuman Dhoka Palace Square-an ancient seat of the Nepalese Royalty.

Hanuman Dhoka Palace Complex consists of a huge Royal Square imposing a tremendous variety of temples dedicated to different Hindu gods and goddess. Most of the buildings we see here date from 15th to 18th century.

The entire Palace Complex here is named after a monkey god called Hanuman. One can see a huge stone statue of Hanuman painted all red right next to the main entrance ( the golden gate) of the palace. Hanuman here is regarded as a powerful protector of the entire Durbar Square.

Some of the important monuments to be seen here are: 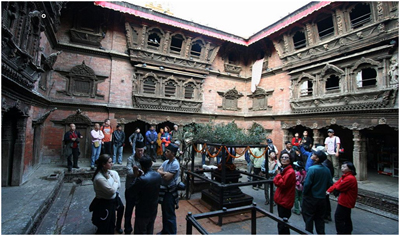 Taleju temple- tallest of all structures built by KingMahendra Malla in 1549 A.D.

one of the largest stone idol in Kathmandu representing the terrifying aspects of Shiva.
Statue of King PratapMalla in praying gesture to DiguTaleju the royal family deity right across.

built from the timber of a single tree. The Kathmandu City derives its name from Kasthamandap.

Besides this other fascinating part of this palace complex is the towering Nautale Durbar overlooking the beautiful cityscape and the vast Basantapur square where Prithivi Narayan Shah built mansion to commemorate his victory in 1768 A.D. This building complex is known for the most intricately carved wooden doorways roof struts and massive lattice windows full of mythical figures. 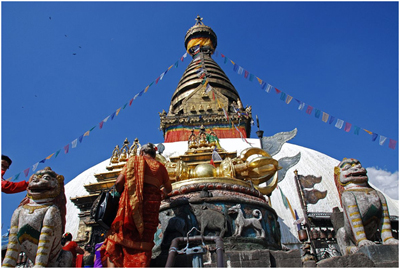 Located in a lovely little hill rock SwoyambhuNath Stupa is one of the most fascinating architectural jewels of the world. This great Stoup is said to have been built around 250 B.C.

Generally a holy memorial site Stoup represents a typical Buddhist architecture. Its main feature the white dome is identified with a spotless pure jewel of Nirvana and a thirteen tiered golden spire in conical shape surmounted on the dome. Underneath this towering structure are a pair of all seeing eyes of Buddha painted on all four sides of the Stupa.

The Stupa of Swoyambhunath stands on a typically stylized lotus mandala base-a long time ago believed to have originated from a legendary lake of Kathmandu Valley.

As the ancient legend goes Kathmandu Valley was a lake a long time ago. Right in the centre of this lake was a full blown lotus with the divine light a top. When MahaManjushri a saint from China heard about this he came rushing all the way from China to the Valley. He cut through the southern wall hill of the valley with his divine sword. The cleft made by the sword immediately drained the entire lake water making the valley floor open for a close up view of the divine lotus light.

This holy site in fact is the massive stupa complex ever built in Nepal. Hundreds of votive shrines and other historical monuments built in and around this stupa speak a lot about the significance and antiquity of this famed stupa.

It lies about 3k.m. west of down town Kathmandu. There are two different ways to reach for this site. One is from the west side which is relatively a short cut and another is from the east side where it leads to the main entrance with 360 steps leading all the way to the top, where the most venerated Swayambhu Stupa stands-commanding a magnificent view of Kathmandu Valley and the breathtaking panorama of the north eastern Himalayan range. 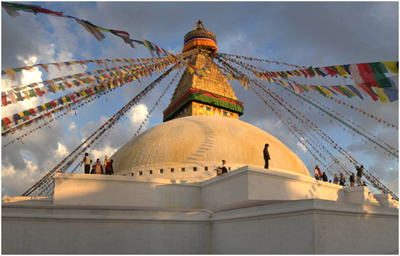 One of the oldest and the biggest Buddhist monuments ever built in Nepal,Boudhanath is an imposing structure standing some 36 meters. The Stupa stands on the massive three level mandala style Platforms surrounded by colourful private family houses. The basic feature of this great stupa is very much like that of Swoyambhunath stupa except its finial displaying. It is much bigger than Swoyambhu stupa and lies on the valley floor whereas the former one stands on the hill top. This stupa is said to have been built in 5th century A. D. The site is considered very much like Mecca for the Tibetan Buddhists and every year tens of thousands of pilgrims from all over the Himalayan region visit the stupa.

According to a very popular legend long time ago the kingdom of Kathmandu was under terrifying draught. King Dharma Deva was very worried. An astrologer advised him that only the sacrifice of an ideal man with 32 virtues in front of the dry royal water spout could make the rain fall in the country. And in the following night he commanded his son to go to the dry water spout inside the royal palace compound at mid night and behead the person shrouded in white robe without looking at him. The Prince obeyed his father but to his great horror only to find it was none other than his own father. 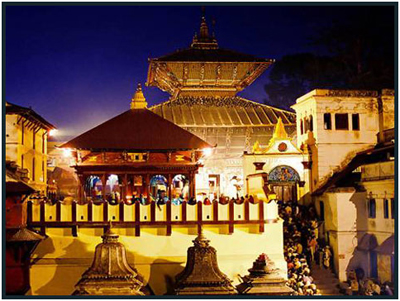 Pasupatinath is considered one of the holiest shrines of all the Hindu temples. The temple has remained the presiding deity of ruling Nepalese Royalty. Located on the banks of the Bagmatiriver, this two tiered magnificent golden temple with four triple silver doorways is unique example of the Nepalese temple architecture. It is one of the largest Hindu temple complex in South Asia with hundreds of Shiva lingams, shrines icons of various Hindu god and goddess insides.

This temple site occupies an area of 281 hectares in total. The main entrance of this temple is in the western side facing a small street of Deopatan market. As non Hindus are not allowed to enter this temple courtyard. They are advised to go on the other side of the river in the East to have a glimpse of the temple complex. In the middle of the spring (Feb.-March) every year there occurs a festival called Shivaratri. The world Shivaratri means the holy night of Lord Shiva. On this day many devotees visit the PashupatiNath temple and make the ceremonial fire.

Most of the devotees spend the night offering prayers to Shiva. This festival attracts tens of thousand of pilgrims from India besides the locals. Historically pre-Christian era this temple seems to have its origin away back to the early Kirat period. Stone sculptures found in the vicinity support the antiquity of this place. This holy site is 6 km. east oil down town Kathmandu. Regular bus and taxi services are easily available from a city points. 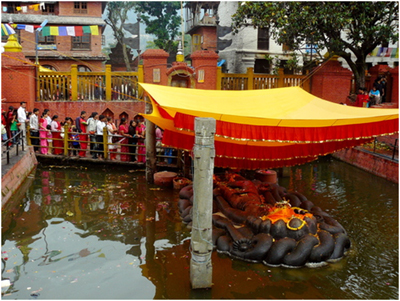 Situated below Shivapuri hill at the northern end of the valley, Buddhanilkantha temple is 9 km from Kathmandu city. The temple consists of a pond in which lies a great stone figure of the Hindu god Vishnu reclining on the coils of a cosmic serpent. The huge statue of sleeping Vishnu is carved from the single block of black stone of a type not found in the valley. It is believed that ages before the two hardworking farmers (husband and wife) discovered the statue when they were ploughing their field.

Besides Budhanilkantha temple, there are other two sets of exactly similar, but smaller statues of ‘sleeping Vishnu’ in the Valley. One set is in the Balaju garden and the other is hidden in the old garden of Hanuman Dhoka Palace of Kathmandu city. A prophetic dream of King Pratap Malla generated the belief that the King of Nepal should never visit Buddhanilkantha temple on threat of death. He then built the similar statue in two places.

It is situated below Nagarjun Hill about five-kilometer northwest of Kathmandu City. The garden is known for its bank of 22 stone waterspouts (hiti) carved in the shape of sea-dragons. It alsoconsists of religious shrines, fishponds and a replica of the statue of Budhanilkantha. There is also a swimming pool inside the park.